My Pop Life: Don’t You Take It Too Bad – Guy Clark

A Chequered musical quilt of an autobiography, in song-shaped episodes. My Pop Life takes one moment in my life and looks at it through a piece of music. Sometimes the piece of music fits that moment really well, other times not. It is not a list of my favourite songs. It is my look back at an eventful, dysfunctional, random musical life. It is therapeutic and hopefully without regret. There is no plan. Here is one entry.

When they read the names of those who passed in 2016, spare a thought for Guy Clark. We mourned Bowie & Prince, Alan Rickman & Victoria Wood, Phife Dawg, Rick Parfitt, Gary Shandling, Gene Wilder and Kenny Baker, Merle Haggard, Arnold Palmer and Robert Vaughn, Emerson & Lake, Leonard Cohen & Leon Russell,  Pierre Boulez and Sir George Martin, Fidel Castro & Muhammed Ali, all huge losses in what seems like the most life-shatteringly devastating era in all of our lives.  And in May a great country songwriter passed away, leaving behind a wonderful collection of songs and memories. Guy Clark emerged from Texas in the early 1970s in that loosest band of cowboy-outlaw country singers who smoked weed and drank bourbon and wrote brilliant, finely-wrought songs : Willie Nelson, Kris Kristofferson, Townes Van Zandt, Steve Earle,  Jerry Jeff Walker, Gram Parsons, Emmylou Harris and Rodney Crowell.

I was passed this song in 1986 as I rehearsed a TV play in called The Black and Blue Lamp for the BBC, written by Arthur Ellis.

We rehearsed in a large warehouse-like space with generous windows and the floor marked out with coloured tape to the exact dimensions of the TV studio where we would eventually film the screenplay. I had already done a few BBC dramas and felt comfortable in there, in fact my first ever TV acting job rehearsed in that very room. But before we rehearsed, we held a read-through, known as a table-read in the United States. These are always slightly tense affairs, covered with bonhomie and smiles as everyone hears the words for the first time in the mouths of those that will say them. And all departments are represented sitting around that giant table. Make-up designers will come up afterwards wondering whether you should keep those sideburns or not. And Wardrobe have taken a liking to your shirt and shoes, I always thought ‘because you’d chosen something that fitted and looked nice because it was the read-through!!’

Actor Nick Stringer was an Equity man, a Union man, to the degree that he ostentatiously opened the envelope containing his script in front of the producers and the BBC hierarchy at the read-through, just on the exact minute when he was supposed to start work, and when he would start to be paid.  The rest of us had quite naturally read it at home the night before.  Why draw attention to yourself in that aggressive way? Anyway, the screenplay by Arthur Ellis was funny and dark and clever, with a nice twist. Not 3 years earlier I had filmed a whole series of The Bill as PC Muswell, the first openly racist copper on a British TV cop show (alongside first black copper PC Lyttleton played by Ronnie Cush) so I appreciated the joke.

The song Don’t You Take It Too Bad  is deceptively simple moving through F G and C, but not in a 12-bar blues shape.  It is a huge warm hug of a song, a plea to take your time and appreciate the passing of time and space rather than sit and wonder what is going wrong at every opportunity.  I need to hear it every now and again, for it calms me. The introduction has already slowed you down with the lazy piano licks, slide guitar and weary harmonica leading us to that great arm around the shoulder of the first line.

This is immense songwriting, simple and plain, touching and strangely effortless, yet with a lived-in tone that must come from pain. The writer, the troubled opaque genius Townes Van Zandt, also from Texas, was the hidden prize behind this song for me. Guy Clark does a filled-out version of the song with extra instruments, Van Zandt’s original is simplicity itself, modelled on early Dylan and Hank Williams.

The song appeared on Clark’s self-titled 3rd LP Guy Clark in 1978, and from that date on, he would include a Townes Van Zandt song on almost every album until he died earlier this year.

Townes had met Guy Clark in Houston in 1964 where Guy ran a guitar shop, drank, smoked weed and wrote songs,  and they would be close friends for the rest of their lives. At Townes Van Zandt’s funeral in 1997 I think it is Guy Clark among the many musician mourners playing his songs as a final lament who remarks “I booked this gig 33 years ago” and the whole church chuckles at the darkness of the remark. Anyone who met Townes knew that he wasn’t quite right. Shall I count the ways? His sad noble face is marked with pain and doubt throughout the beautiful documentary Be Here and Love Me. 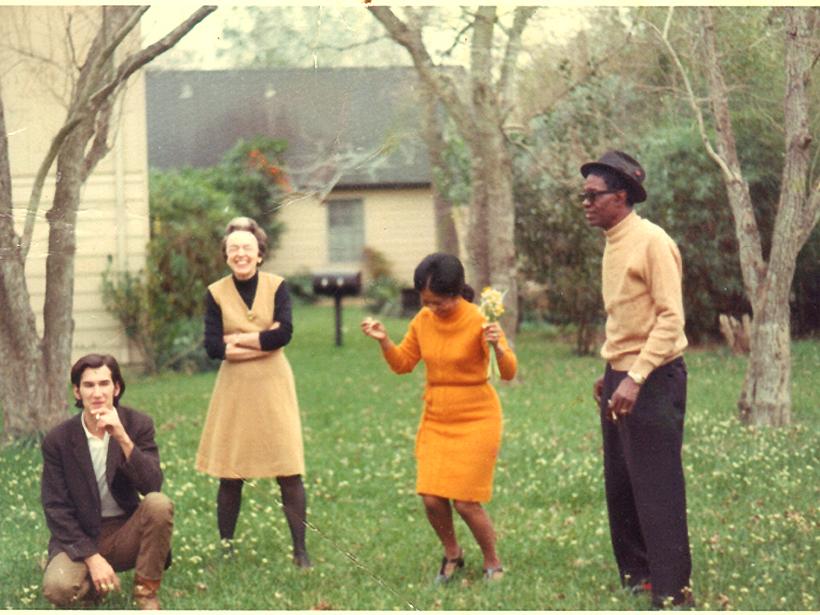 After a regular sporting teenage college life his first vice was glue. After bouts of depression a doctor recommended insulin treatment (and perhaps electro-convulsive therapy which my mum was given in 1965) and which his parents agreed to, and later regretted.  After these treatments Townes lost most of his visual memory.  His Damascene conversion to music (as opposed to the army) was seeing Elvis perform on the Ed Sullivan show, but the army rejected him because of manic depression and ‘a poor adjustment to life’.  This was the pattern of his life.  Drink, heroin, depression, songwriting.  He spent most of the 70s and 80s living in a shack south of Nashville with no electricity or telephone.  His songs however were extraordinary.

Steve Earle famously said he was the finest songwriter alive “and he would stand on Bob Dylan’s coffee table and say that”.  Dylan himself sought out Townes and they played together in his trailer but none of this made any difference to the man. In the moving and evocative documentary of his life and work made in 2005 by Margaret Brown, all three of his ex-wives speak of him with tenderness, while the children have varying degrees of skepticism about his addictive hobo personality as a cop-out choice rather than artistic bravery, whilst apparently knowing the words to all his songs.

All of this resonates deeply for me thanks to my mum’s schizophrenia and her uncanny ability to cut to the raw truth of a situation or person – if she could play a musical instrument I think she’d have been a profound songwriter. But then again, like the honest account of Townes Van Zandt that caused that chuckle to ripple through his funeral, it can be extremely discomforting as well. And the idea of living a pure heroic life dedicated to your art is naturally selfish and few attempt it without collateral emotional damage to their nearest and dearest. I get it and maybe that is why the songs move me so much, both when Townes sings them, or when others cover them as Guy Clark and many others have done. Perhaps his best-known song is Pancho & Lefty which was a hit in 1983 for Willie Nelson & Merle Haggard (who also passed on this year). The sudden rush of income from this made no difference to Townes who performs a memorable acoustic version of it himself  in the 1975 outlaw documentary Heartworn Highways.

Fifteen months before his death Townes Van Zandt played a benefit concert in the Bluebird Cafe in Nashville for the Interfaith Dental Clinic organised by Guy Clark’s wife Susanna. They had fixed his tooth after he lost his gold tooth gambling in the backwoods.  It’s a long, funny story, and Townes tells the story between songs on the resulting concert album.  Together at the Bluebird Cafe, was finally released in 2001, four years after his death. It features Townes Van Zandt, Steve Earle and Guy Clark, each playing a separate set but their lives and music are forever intertwined.  It is, like all of their music, a true find.

The end of the song has the elegiac 3rd verse as follows :

Guy Clark sounds tired but comforted, and appropriately he has both a male and a female harmony alongside him to sweeten things with a sad harmonica, a fiddle and that bluesy piano. Three verses, three instrumental breaks, no chorus.  I can’t think of another song with an arrangement like that, simple but original, like an old-time folk song about getting through life.   Gentle. Considerate.  Empathetic.  A comfort every time I hear it.

Ralph Brown is an actor, writer and musician who lives in Brooklyn, NY.  He has worked in the West End, Broadway and Hollywood and his writing has been translated into French, German, Italian, Spanish and Japanese.

Tidings of Magpies is a labor of love. We appreciate anything you can contribute to keep it flying.